ICO aims at disrupting both traditional venture capitalism as well as expanding the broadness of cryptocurrencies beyond that of just Bitcoin. The ICO trend got humongous attention in 2017, a lot of companies both successful and unsuccessful went for the ICO and raised a huge amount of capital through this source of funding. Although the start of this year was favorable towards the ICO industry yet almost 46% of the ICO’s failed in 2017 with a lot of regulatory compliance started to emerge in the industry. Sit tight for the complete and overall ICO analysis for this year.

The idea of ICO was first proposed in a Bitcoin Talk by Jeff Willet, here is a small extract of his proposed idea.

“If you wanted to, today, start a new protocol layer on top of Bitcoin, a lot of people don’t realize, you could do it without going to a bunch of venture capitalists and instead of saying, hey, I’ve got this idea, you can — you’re familiar with Kickstarter I assume? Most of you?

It’s going to have new features X, Y, and Z on top of bitcoin, and here’s who we are and here’s our plan, and here’s our bitcoin address, and anybody who sends coins to this address owns a piece of our new protocol. Anybody could do that.

The first ICO was held by Mastercoin in July 2013 led by Jeff Willet. Later Ethereum raised money with a token sale in 2014 raising 3700 BTC in its first 12 hours, which was approximately $2.3 Million at the time.

In May 2017, Brave a web browser which provided a platform decentralized application raised about $35 Million in under 30 seconds!

But the trend eventually started declining. On February 23, 2018, Bitcoin.com reported that 46% of them are effectively dead already – despite raising over $104 million.

Complete Analysis of ICO in 2018

If we go by the geographical demographics, the United States has dominated the ICO market by 16.02%, followed by the United Kingdom at 10.36% and Russia at 7.61%. The adoption of the ICO model talks a lot about the way people are raising funds. It shows that people have moved from the traditional funding method of Venture Capitals. The new way of crowdfunding has liberalized how entrepreneurs approached for capital.

The country with the highest percentage of adoption shows that people from that area are more technically sound and are comfortable raising their funds through ICO.

Although Network Communications contributed only 2.67% when it comes to project per category in percentage, however, the capital raised in USD by this sector was the maximum amounting to $4,640,447,641. This shows that even the contribution in terms of the project is lower in Network Communications, however, the capital required in the sector is huge as compared to other sectors. 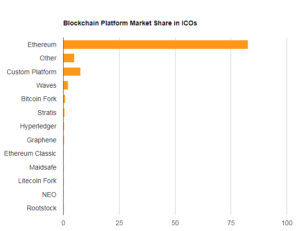 This data represents the ICO projects that are grouped based on the underlining blockchain technology with which the project’s tokens were developed. Ethereum is the one who introduced Smart Contracts. This is one of the reasons it gained a lot of attention from the developers.

Just like a traditional contract where two counterparties are coming together over a general agreement over something. A Smart Contracts provides the feature of a contract getting executed when specific terms defined on the contract are successfully executed. But a Smart Contract uses an algorithm in order to verify and validate a contract.

This feature made the Ethereum Blockchain one of the most advanced Blockchain ever. This is the reason a lot of projects decided to choose Ethereum as the base layer for their project.

Here the projects are grouped by the month and calendar year of ICO campaign execution. The ICO analysis done here is through the projects that are displayed in the graphical representation and the amounts raised are also indicated on a monthly basis.

You can use this as a trend tracker and to also take note of the seasons of capital flow into cryptocurrency projects. Additionally, it can be used as a Return on Investment (ROI) guide.

This graph also shows the total capital raised by the ICO market for this month, with January, February and March was the time for Telegram with its ICO.

Telegram raised a staggering $1.7 Billion through its ICO in the first 3 months itself, which was followed by a pre-sale 1 and 2 respectively.

Published and Unpublished results of ICO 2018 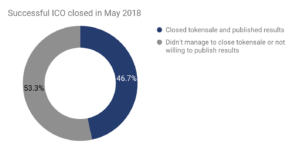 This statistic of the ICO analysis throws light on the responsiveness of the ICO’s. Only 46.7% of the ICO’s have disclosed and published their results and data which is vital for investors. The other half talks about the ICO’s that are either not delivering on the promises made by them or their project is not keeping up with deadlines.

The Future of ICO

Although the concept of raising capital in the form of ICO is a lot controversial today, one of the examples is the ICO of Tezos, which went through multiple lawsuits. Such issues are expected to arise because ICO’s are still in the infant stage of development and growth.

ICO is not the only option companies and enterprises are moving to. Security Token Offerings (STO) is something many big companies are leaning towards this new form of raising capital.

STO is a token which is backed by a real asset, profits or company revenue. Venezuelan government’s oil-backed Petro coin is a good example of STO. These coins are meant to operate more like traditional securities and to meet all the requirements of the Securities and Exchange Commision(SEC).

Such emerging development in the decentralized crowdfunding technology and platforms will give rise to a lot of enterprises and startups with better funding solutions and at the same time providing investors with more transparency and better security solutions.