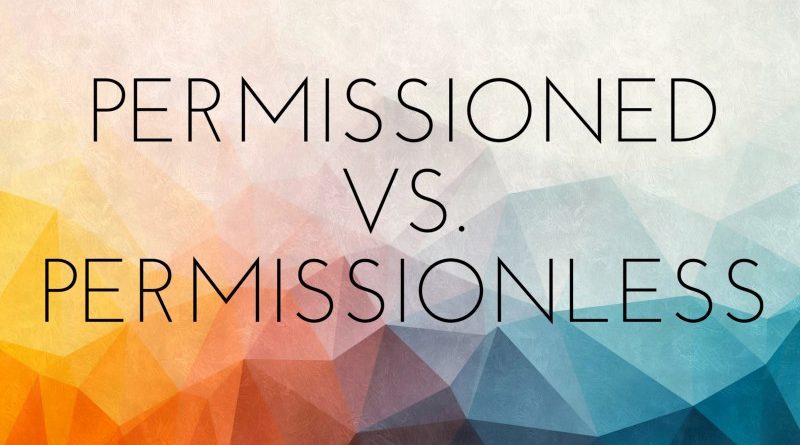 Through this article, we are going to cover what is a permissioned and permissionless blockchain and what are the key differences between them with respect to certain technical parameters.

In the Bitcoin network, anyone can participate in the network. You can be a miner who mines the transactions from the pool. You can join and leave the network whenever you wish to and you would receive the rewards in terms of Bitcoin for the transaction you have verified.

In other terms, anyone can be a valid node in the network with free entry and free exit of the nodes. This is a public network where the participants can freely join the network and exit whenever they wish to do so.

Here basically anyone can join the network, read the chain and anyone on the network can make any legitimate changes in the Blockchain and write a new block and add it to the existing chain as long as they are following the consensus (rules) maintained by the network.

On the other hand, Blockchains can also be created in a different way. It can be built in a way where in order to read, write, verify and modify the Blockchain one would need a permit. This type of Blockchain limits the parties who can transact on the Blockchain and the block validators on the network (miners).

A blockchain developer may choose to make the system of record available for everyone to read, but they may not wish to allow anyone to be a node, serving the network’s security, transaction verification or mining. It’s a mix-and-match situation that is reflected in the various ways entrepreneurs are experimenting with the technology.

Below is a complete table that has been formulated by us giving a comparison between the different Blockchain Protocols including both public and permissioned (private) Blockchain.

There is one fundamental and important point that makes a public and permissioned Blockchain different. The security of Bitcoin comes from the Proof of Work which requires huge computing power in order to validate the transactions in a transaction pool.

This security feature makes it almost impossible to reverse any transaction that has already been added to the Blockchain.

However, in the permissioned Blockchain, the security would totally depend upon the parties that validate the transaction. They may choose to go for a particular consensus mechanism like Proof of Work in Bitcoin.

But in a permissioned Blockchain, the underlying decision of adding a transaction to the Blockchain depends on the entities or the parties validating the transaction.

Since the network is closed and there is a restricted entry, this makes thePermissioned Blockchain a lot centralized, so there is no mathematical guarantee behind the irreversibility of the transactions in a permission Blockchain.

Permissioned Blockchains have value, but the value addition the Blockchain would provide is by bringing marginal improvements to the existing system. Public Blockchains provide a lot more security as it follows a consensus mechanism that is not required to govern by any centralized authority.

This doesn’t mean that Permissioned Blockchain has no future. These private chains are catering to a large segment of institutional investors who are open to private chains and not public because of their tailor-made requirements.